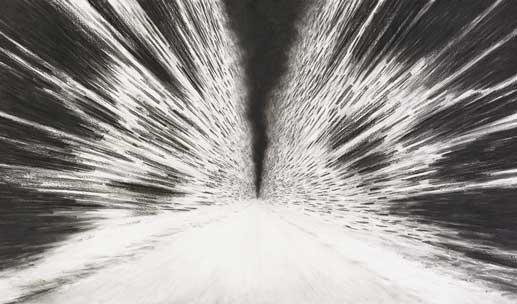 “Inside Outside”, with Netherlands-based Raquel Maulwurf and Jan Wattjes, in collaboration with Livingstone Gallery, The Hague, kicks off a regular exchange project. We would like to direct attention to emerging artists of our neighbouring country. Jan Wattjes has been nominated for the Royal Award for Modern Painting: his work will be exhibited with all the nominated artists in October 2016 at the Royal Palace in Amsterdam. In November 2016 Livingstone Gallery will feature two artists from our programme: Nadja Schöllhammer and Roger Wardin.

Raquel Maulwurf (born 1975 in Madrid, Spain) lives and works in Amsterdam. She has made a name for herself with her large-scale charcoal drawings. She studied at the Art Academy of Arnhem. Her work is included in numerous international collections including the Rijksmuseum in Amsterdam, Stedelijk Museum Schiedam and Teylers Museum in Haarlem. In 2017 Raquel will have a solo exhibition at the Gemeentemuseum The Hague. In 2011 she had a fellowship at the prestigious International Studio & Curatorial Program (ISCP) in New York. Apart from an exhibition at a gallery in Cologne, “Inside Outside” will be her first solo exhibition in Germany. Working exclusively in black-and-white, Raquel has created her signature artistic style with charcoal and pastel on thick museum board. The board‘s thickness allows her to scratch the surface with sandpaper and utility knives until the paper pulp almost pours out. Using this particular method she creates impressions between beauty and violence. Her first drawings encompassed the topic of the Second World War, burning forests and atomic bombs. Maulwurf’s new works, made especially for the exhibition in Berlin, show landscapes, nightscapes and seascapes with turbulent oceans and seething clouds. Her interest lies not in the beauty of the landscapes, but in the dark side of nature, the threat of environmental destruction and the influence of civilization.

Jan Wattjes lives and works in The Hague where he was born in 1981. He studied there at the Academy of Fine Arts and at the Frank Mohr Institute in Groningen, The Netherlands. He has received numerous awards and fellowships, a.o. from the Mondriaan Fund in 2013 and 2016. “Inside Outside” will be his first solo exhibition in Germany. In his paintings, often supplemented by video and installation, he deals primarily with the issue of the artist and his surroundings. Thus, his first series of works shows artists’ studios, renowned colleagues, who he calls his artistic family, and the Mobile Studio. In recent work, he has turned to the galleries and initially painted actual international galleries from the outside within their urban space. In his latest work, which will be shown at the exhibition in Berlin, he focuses on the facades and interiors of these international galleries. Reminiscent of Mondriaan in their abstract implementation, these works are reduced to the minimum. Wattjes records the intermediate state of the gallery, the white cube, between two exhibitions. Overall, he reflects on the conditions and characteristics of artistic existence, the identity of an artist and the possibilities for a young artist to position himself in the art market.

Supported by The Embassy of the Kingdom of the Netherlands.