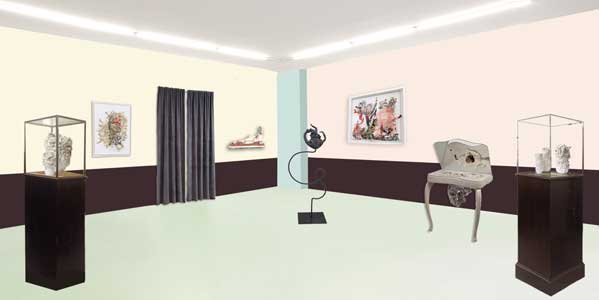 Entitled De Voluptate, borrowed from the paper of the renaissance humanist Lorenzo Valla De voluptate sive de vero bono (From pleasure or from the true good) in which he rehabilitates sensuality as a natural, ethical principle, we present works by the artists Angelika Arendt, Nadja Schöllhammer and Caro Suerkemper. The three artists are in pursuit of this principle and its significance in times of disembodiment, digitalization and the increasing economisation of art and the world. Their different artistic signatures combine the artistic realisation of joie de vivre, opulence and obsession.

The gallery space is staged as an intimate salon in the interplay of sculptures and paper works. Angelika Arendt, renowned for her amorphous texture in drawing and ceramics in connection with natural forms, shows her new porcelain works in old showcases of the Kunsthistorisches Museum Wien (Vienna) for the first time. The elegance of these playful valuables is marked by the diversity and abundance of the structures, and her meticulous way of working evokes devotion and respect for creation. Similar to the working process of automatic handwriting (écriture automatique), Nadja Schöllhammer’s paper works proliferate and grow. She stages her experimental three-dimensional cut-out work in a showcase, the obsessive image space is like a stage, full of energy and passion. She is interested in themes such as the human unconscious and its transformations.

In her figurative sculptures, Caro Suerkemper approaches baroque joie de vivre and opulence, while also tracing human transformation. The supposed vulgarity is an ironical display of ecstasy and rapture which equates to liberation striking against rigid conformity. In the sculpture, she works with a wide variety of materials: ceramics, bronze, and Acrystal®. In her table sculpture Stimulus Response, she playfully documents the different states of a casting process, which, as it were, represents a pleasurable way of dealing with one’s own self-image. The presentation is supplemented by collaborative works (Arendt & Suerkemper, Arendt & Schöllhammer) and, in the cabinet, drawings by all three artists.

In the staging of De Voluptate, the observer is confronted with artistic utopias that challenge one’s own senses and the pleasure and sensuality of a place of knowledge, far away from escapism.