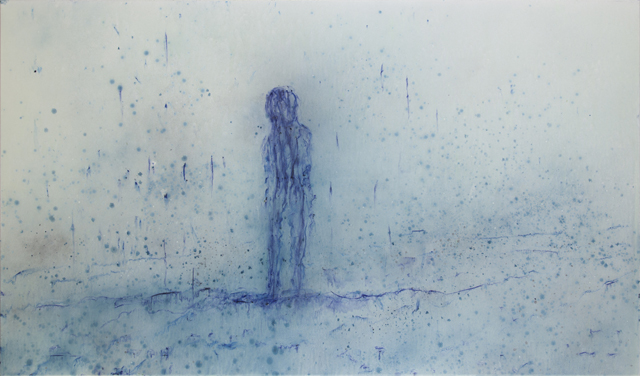 On the occasion of his 60th birthday, we present current paintings and sculptures by Amador. The artist lives and works on Mallorca. He has been regularly present in exhibitions in Germany and Berlin since 1995, for example in 2005 at Georg Kolbe Museum. After working the last 20 years in the media of photo, video and installation, he now returns to painting and drawing. He uses one of his most important materials, epoxy resin, but adds a particular painterly touch to his wall objects. Likewise, Amador pursues the silhouettes-like anthropomorphic body forms by means of which he reflects the conditio humana, with topics of globalization and migration being the focus since 2000.

In the current series, he deals with the contradictory relationship between man and landscape. The landscape does not appear as a safe retreat, but becomes a counterpart. The Mediterranean, as a meeting place for civilizations, has become a hub of human drama more than ever before. Alone, in pairs or in a group, Humanity must reflect and assert its place in this indifferent environment.

The archaic-looking torsos are highlighted with contemporary neon elements. The neon appears as a line, like a sketch, which describes the bodies. Amador transforms older works, sculptures from the series “De ayer a hoy”, whose bodies are covered in Mallorcan soil, into unapproachable beings, which are hermetically sealed by a dark layer of epoxy resin: only in light will one see a glimmer from their origin. Those works, like all artworks by Amador stand between the poles of anxiousness and poetry, just as the title “Silencis” (rest) refers not only to meditative rest in oneself, but also to an increasing powerlessness and anxiety against the influences of the world outside.